Just our walking my dogs and in a patch of long grass something catches my eye, on closer inspection it's a tangled piece of rusted barbed wire. Now this is most probably a bit of agricultural detritus but it immediately suggested an idea to me.

It's coming up to the 30th anniversary of the liberation of the Falklands from Argentine occupation in 1982, this short but bloody conflict left many scars, on the servicmen and women involved, on the families of those who died, on the Islanders who lived through the conflict and on the land itself. It was the latter that struck a chord in this instance, this innocuous bit of rusted metal, tangled and overgrown after many years seemed to take on significance as a metaphor of the effect the conflict has left, it's been a long time and time has healed much of the hurt but the legacy of those bloody days is still here. Question is can I translate that metaphor into a painting?

I'm sure going to try. This is a bit of a departure for me as I'm not working with a definate reference or goal in mind, I just want to see where the idea takes me, possibly even into the unexplored territory of abstraction. Painting by the seat of my pants so to speak. 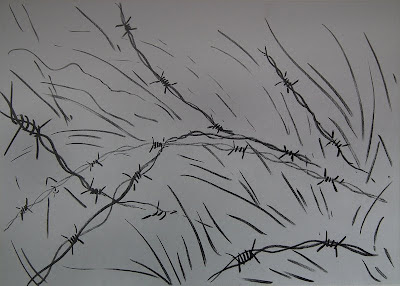 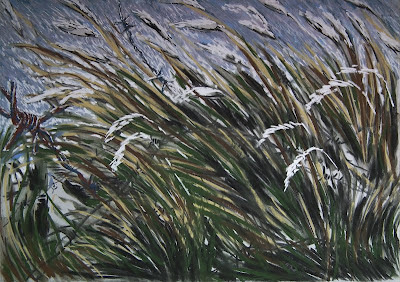 Email ThisBlogThis!Share to TwitterShare to FacebookShare to Pinterest
Labels: Experiments, Work in progress