Way back in April I did a commission for a client of a sheepdog against a backdrop of mountains, Here it is, Bruce the Huntaway. I mentioned then the possibility of another, bigger commission of a historical scene of the old industry of harvesting penguins for their oil, a grisly and largely unknown practice that had been overshadowed by the larger and more emotive whaling and sealing industries.

I have now completed the painting, This is by a long way the largest, most complicated and most difficult piece I've attempted so far in my fledgeling art career. No photographs of this activity exist (that I know of) just accounts and some rather fanciful illustrations so the entire scene is a creation of my imagination based on what is known about the process. It boils down to this (if you'll pardon the pun):

Penguins were driven into a rough corral on a beach using dogs to keep them together in a flock. There was a large trypot that had a spout running into a smaller pot for refinging the oil. The penguins were clubbed inside the corral then passed out to be bled and gutted (to remove as much water and bulk as possible), the carcases were then thrown in the trypot which was heated initially with wood or coal but as the rendering proceeded with the oil soaked remains of the penguins that were fished from the pot with a long handled scoop. the refined oil was casked and shipped away.

Here's how the painting progressed:

This is the initial concept sketch I knocked out to get the elements together in a way I felt worked. On the right is a full size study that helped me to finalise the composition. 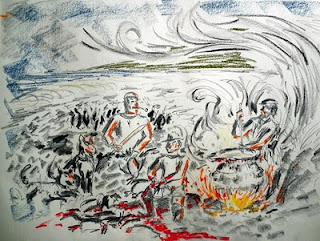 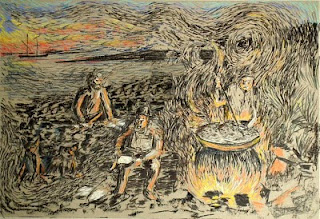 This is the initial sketch on 70 X 100cm anthracite pastelmat and the first roughing in of colours and light/shade. 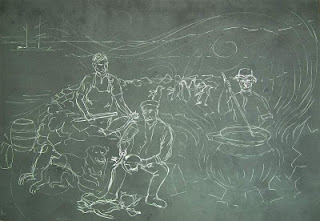 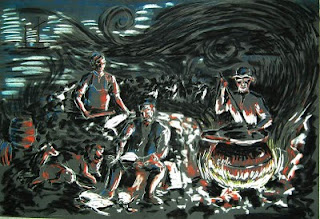 All the detail coming together, at this stage I didn't know about the refining pot, fortunately there was room to fit it in where it was needed. 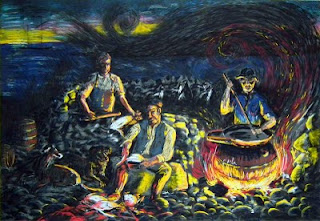 The finished painting. I was trying to get a dirty, hellish feeling to it to reflect the grisly nature of the activity while not portraying the protagonists as wicked people in any way, just men at work with a dirty job to do. I'm pretty pleased with it. 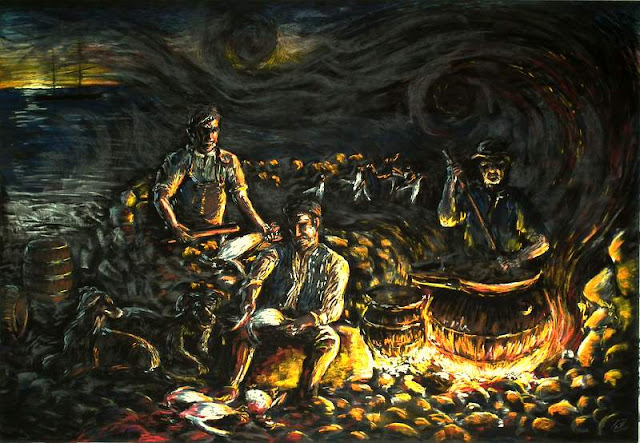